The Argentera Massif is located at the boundary between Italy and France and is the southernmost of the Alpine External Crystalline Massifs. The basement of the Argentera Massif shows elegant folded and sheared Variscan migmatites only locally affected by Alpine tectonics. This Massif is divided in two metamorphic complexes made by high-grade migmatitic gneisses: the southwestern Tinèe Complex (TC) and the northeastern Gesso-Stura-Vesubiè Complex (GSV). They are separated by a NW–SE oriented 25 km long shear zone known as the Ferriere-Mollière shear zone (FMSZ). In the northern sector the FMSZ reach its maximum thickness of nearly 2 km.

The FMSZ is a transpressive ductile shear zone showing a dextral movement. Its activity is linked to the late-Carboniferous transpressional event that characterize many Variscan fragments in the Mediterranean area such as the Corsica-Sardinia Block and the Maures Massif. Mylonites of the FMSZ result from the shearing of the migmatites belonging to both the GSV and the TC. Different types of mylonites were recently distinguished and mapped by Carosi et al. (2016) taking into account the percentage of matrix and porphyroclasts both at the meso- and at the microscopic-scale. A deformation gradient marked by a transition from protomylonite, mylonite and ultramylonite has been detected.

Simonetti et al. (2018) recognized that deformation within the FMSZ progressively concentrate in the core of the shear zone. This leaves the margins inactive and the active part gets progressively thinner, in agreement with a type II evolution. They also dated the initiation of the between 340 Ma and 330 Ma.

Detailed investigation of the main mineral recrystallization mechanisms and of the syn-kinematic mineral associations along the deformation gradient, revealed that the activity of the shear zone happened under decreasing temperature conditions (from high-temperature amphibolite-facies to greenschist-facies). High-temperature paragenesis are preserved in the margin of the shear zone while lower temperature assemblages are recognizable in the core of the structure.

The aim of the guide is to show some key outcrops that allow to recognize the increasing deformation gradient toward the core of the FMSZ. The outcrops are located in the Valle Stura di Demonte (CN, Italy) in the Pontebernardo valley. 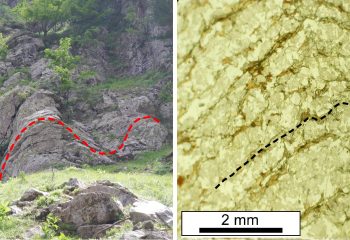 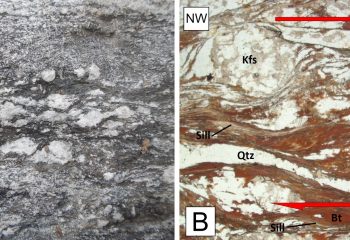